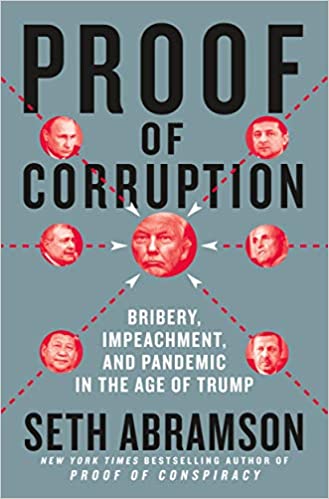 Book Author Podcast – Proof of Corruption: Bribery, Impeachment, and Pandemic in the Age of Trump by Seth Abramson

Proof of Corruption: Bribery, Impeachment, and Pandemic in the Age of Trump by Seth Abramson

While the facts of each Trump bribery scandal are complex, the pattern of corruption remains the same, whether it involves Trump seeking to appease Vladimir Putin by returning Ukraine’s energy industry to Kremlin control; Trump freezing aid to Ukraine to extort bogus “intelligence” on Joe Biden from corrupt Ukrainian prosecutors; Trump escalating a trade war with China while privately cutting election-dirt deals with Xi Jinping; Trump ignoring November 2019 intelligence warning of a dangerous virus outbreak in China due to his business interests in Beijing; or Trump promoting a dangerous and ineffective treatment for COVID-19 at the behest of his richest campaign donors.

With Donald Trump, all roads lead (by design) to personal enrichment. Sometimes he’s seeking to fill his 2020 reelection coffers, and sometimes his illicit self-dealing and epic corruption center on his personal business relationships; sometimes the crimes and their subsequent cover-ups are domestic, and sometimes they’re international. But the audacity of Trump’s offenses and the need for byzantine schemes to hide them remains the same.

With thousands of citations from the world’s most respected media outlets, Proof of Corruption tells the story of a bribery and election-tampering scheme that crosses years and stretches from China to Ukraine, Turkey to Venezuela, Hungary to Israel, Russia to Saudi Arabia. It is a plot that empowers America’s adversaries to author U.S. foreign policy and tamper with our elections even as it frees Donald Trump to replace America’s national interest with his own.

Proof of Corruption reveals a harrowing pattern of international and domestic bribery that is shocking, criminal, and a clear and present danger to America.

Seth Abramson is a former criminal defense attorney and criminal investigator who teaches digital journalism, legal advocacy, and cultural theory at the University of New Hampshire. A regular political and legal analyst on CNN and the BBC during the Trump presidency, he is the author of eight books and editor of five anthologies. Abramson is a graduate of Dartmouth College, Harvard Law School, the Iowa Writers’ Workshop, and the Ph.D. program in English at University of Wisconsin-Madison. He lives in New Hampshire with his wife and two one-year-old rescue hounds, Quinn and Scout.