Book Author Podcast – The Poetry of Strangers: What I Learned Traveling America with a Typewriter by Brian Sonia-Wallace 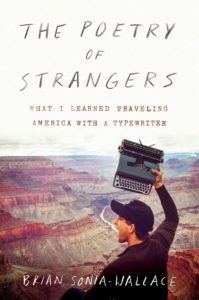 The Poetry of Strangers: What I Learned Traveling America with a Typewriter by Brian Sonia-Wallace

Before he became an award-winning writer and poet, Brian Sonia-Wallace set up a typewriter on the street with a sign that said “Poetry Store” and discovered something surprising: all over America, people want poems. An amateur busker at first, Brian asked countless strangers, “What do you need a poem about?” To his surprise, passersby opened up to share their deepest yearnings, loves, and heartbreaks. Hundreds of them. Then thousands. Around the nation, Brian’s poetry crusade drew countless converts from all walks of life.

In The Poetry of Strangers, Brian tells the story of his cross-country journey in a series of heartfelt and insightful essays. From Minnesota to Tennessee, California to North Dakota, Brian discovered that people aren’t so afraid of poetry when it’s telling their stories. In “dying” towns flourish vibrant artistic spirits and fascinating American characters who often pass under the radar, from the Mall of America’s mall walkers to retirees on Amtrak to self-proclaimed witches in Salem.

In a time of unprecedented loneliness and isolation, Brian’s journey shows how art can be a vital bridge to community in surprising places. Conventional wisdom says Americans don’t want to talk to each other, but according to this poet-for-hire, everyone is just dying to be heard.

Thought-provoking, moving, and eye-opening, The Poetry of Strangers is an unforgettable portrait of America told through the hidden longings of one person at a time, by one of our most important voices today. The fault lines and conflicts which divide us fall away when we remember to look, in every stranger, for poetry. 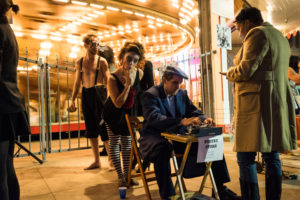 Brian Sonia-Wallace is a street poet and performance artist who challenges notions of art and value. He began RENT Poet, an experiment in paying his rent through writing poems for passersby on the street and at events, in September, 2014. Since then, he’s written for tech companies and governments, toured nationally and internationally, and been nominated for a 2015 Doris Duke Impact Award. Brian is a Partner at the Melrose Poetry Bureau and lives in Los Angeles.