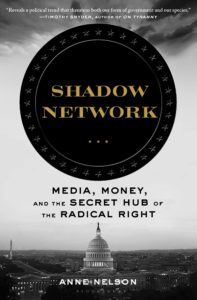 Shadow Network: Media, Money, and the Secret Hub of the Radical Right by Anne Nelson

In 1981, emboldened by Ronald Reagan’s election, a group of some fifty Republican operatives, evangelicals, oil barons, and gun lobbyists met in a Washington suburb to coordinate their attack on civil liberties and the social safety net. These men and women called their coalition the Council for National Policy. Over four decades, this elite club has become a strategic nerve center for channeling money and mobilizing votes behind the scenes. Its secretive membership rolls represent a high-powered roster of fundamentalists, oligarchs, and their allies, from Oliver North, Ed Meese, and Tim LaHaye in the Council’s early days to Kellyanne Conway, Ralph Reed, Tony Perkins, and the DeVos and Mercer families today.

In Shadow Network, award-winning author and media analyst Anne Nelson chronicles this astonishing history and illuminates the coalition’s key figures and their tactics. She traces how the collapse of American local journalism laid the foundation for the Council for National Policy’s information war and listens in on the hardline broadcasting its members control. And she reveals how the group has collaborated with the Koch brothers to outfit Radical Right organizations with state-of-the-art apps and a shared pool of captured voter data – outmaneuvering the Democratic Party in a digital arms race whose result has yet to be decided.

In a time of stark and growing threats to our most valued institutions and democratic freedoms, Shadow Network is essential reading 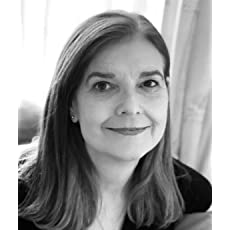 Anne Nelson is an award-winning author and playwright who has written extensively about human rights and the defiance of totalitarian regimes. Her most recent work is “Shadow Network: Media, Money, and the Secret Hub of the Radical Right.” Her previous book, “Suzanne’s Children: A Daring Rescue in Nazi Paris”, a finalist for the National Jewish Book Award, was published in eight countries. “Red Orchestra: The Story of the Berlin Underground and the Circle of Friends Who Resisted Hitler” (2009) was named Editor’s Choice by the New York Times Book Review. She is also the author of “Murder Under Two Flags: The US, Puerto Rico, and the Cerro Maravilla Cover-up.”

Her play “The Guys,” which premiered in 2001 with Sigourney Weaver and Bill Murray, has been produced in all 50 states and 15 countries. Her screenplay of “The Guys” was produced as a feature film starring Sigourney Weaver and Anthony LaPaglia. Her play “Savages,” an exploration of military occupation, was described by the New Yorker as a work of “lacerating beauty.”

Nelson’s writing has been published in The New York Times, Los Angeles Times, Harper’s, and she has appeared on CBS “Sunday Morning” and The PBS “Newshour,” as well as the BBC, CBC and NPR. She has received the Livingston Award for International Journalism, a Guggenheim Fellowship, and a Bellagio Fellowship. Nelson is a graduate of Yale University and a member of the Council on Foreign Relations. She is a research fellow at the Columbia School of International and Public Affairs in New York City.

Nelson lectures frequently on human rights, authoritarian regimes, and the role of the media.
She is represented by Ethan Bassoff of the Ross Yoon Agency, and Authors Unbound speaker agency.