The Chris Voss Show Podcast – Sex with Presidents: The Ins and Outs of Love and Lust in the White House by Eleanor Herman 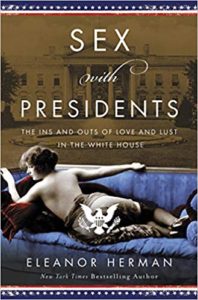 Sex with Presidents: The Ins and Outs of Love and Lust in the White House by Eleanor Herman

In this fascinating work of popular history, the New York Times bestselling author of Sex with Kings and The Royal Art of Poison uncovers the bedroom secrets of American presidents and explores the surprising ways voters have reacted to their leaders’ sex scandals.

While Americans have a reputation for being strait-laced, many of the nation’s leaders have been anything but puritanical. Alexander Hamilton had a steamy affair with a blackmailing prostitute. John F. Kennedy swam nude with female staff in the White House swimming pool. Is it possible the qualities needed to run for president—narcissism, a thirst for power, a desire for importance—go hand in hand with a tendency to sexual misdoing?

In this entertaining and eye-opening book, Eleanor Herman revisits some of the sex scandals that have rocked the nation’s capital and shocked the public, while asking the provocative questions: does rampant adultery show a lack of character or the stamina needed to run the country? Or perhaps both? While Americans have judged their leaders’ affairs harshly compared to other nations, did they mostly just hate being lied to? And do they now clearly care more about issues other than a politician’s sex life?

What is sex like with the most powerful man in the world? Is it better than with your average Joe? And when America finally elects a female president, will she, too, have sexual escapades in the Oval Office?

Eleanor Herman is the New York Times best-selling author of Sex with Kings and Sex with the Queen, non-fiction works on the love lives of European royals through the centuries;Mistress of the Vatican, the biography of a woman who ran the Catholic Church in the 17th century for her reputed lover, Pope Innocent; and King Peggy, the true story of a Washington, DC secretary who became a king of Ghana. In 2015 her first YA novel came out. Legacy of Kings, Blood of Gods and Royals is the first of four books on the adventures of Alexander the Great at sixteen. It has been optioned by the WB network for a TV series. She has appeared on the National Geographic Channel, The History Channel, and the American Heroes Channel to comment about historical matters.

Eleanor is so immersed in the past she is sometimes surprised to find herself in the present. She lives in McLean, VA with her husband, four rescue cats, and a dog, and sneaks out to the movies periodically, not to see the movie, but actually to eat the hot buttered popcorn.