Book Author Podcast – A Rainbow Like You by Andréa Fehsenfeld Interview 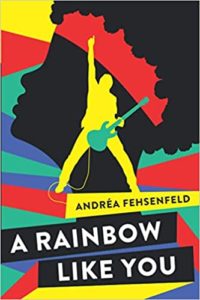 An iconic rock star with everything to prove. A determined teen runaway with nothing left to lose. When their fates intertwine, the most unexpected journey unfolds.

Adrian ‘Jazzer’ Johnson’s gilded rock and roll career is the stuff of legend. From out of the dive bars of Long Beach, this high school dropout rocketed his band to the pinnacle of success. But after a whirlwind decade ended with him broken and questioning, Adrian disappeared.

Now back on tour after a year in exile, Adrian’s still struggling and under pressure to deliver his next hit. The last thing he needs is to find a teen runaway hiding in his tour bus. As it turns out, Hastings Sinclair is a synesthete who can see music in color. But her offer to help color-blind Adrian unpack his creative block upends their lives in ways they never imagined.

Because Adrian’s troubles run deep—beyond what any song can fix—and Hastings hasn’t been upfront about hers. When calamity strikes, a perfect storm of fates unleashes and caught in the crossfire are Adrian’s band mates, a fame-shy beauty he falls hard for, and a scheming journalist with a vendetta. With everything he values suddenly on the line, can Adrian reconcile his own brash history? Or will he be forced to face the music in a way he never has before?